Someone Who'll Get It

When we had our first meeting with Ingrid, she already had a vision for what the video should be – pole dancing, set in a dark and gritty universe. We really fell in love with the idea of building a visual universe in contrast to the graceful dance, and tried to act on this in every decision made.

At Helmet we have a tendency to put some sci-fi in whenever we get the opportunity, and Ingrid’s idea had plenty of opportunities. To give Ingrid something to fight for, we decided to let her stage be a cage that would gradually fill up with oil. Because Ingrid was going to carry the whole video on her own, we developed the idea of her having an inner battle as the oil secreted through her skin and drowning her.

We really fell in love with the idea of building a visual universe in contrast to the graceful dance, and tried to build on this in every decision. To give her something to battle against, we decided to let her stage be a cage that would gradually fill up with liquid. She was always going to be alone in the video, so to make this fight a fight with herself we developed this idea of her inner oil coming out and drowning her. We knew this project was going to be a real challenge to make. We started exploring the visuals by doing a quick test shoot and doing some rounds of concept art on top of that. With those we could play around and narrow in on the lighting, size of of the cage and the world around her, camera distances, placement of the craters etc. When playing around like this, it’s real easy to fall in love with something that’s hard to actually do, so we tried to keep the execution in mind, but we always manage to get ourselves in some trouble in this phase, and this project was no exception.

Visual effects has always been a passion of Helmet, and knowing we had a very short time in postproduction, we tried to use as many practical effects as we could. That meant real oil, real craters on her body, and welding metal sheets to the floor and wall of our studio. The preproduction lastedaround 2 weeks, including concept art, set building, set dressing, lots of oil tests, makeup tests and programming the lighting.

The actual shoot engaged around 25 people, for about a week, with an average workday lasting 12-16 hours. It was hard work, a lot of fun and a lot of oil all around our studio. The clean up alone took around 5 days!

Since we were going for practical oil, we had to find a way to make it look like we had a lot more than we actually did, so to get the shots we needed we got help from our good friend Kristian, who designed a pool that was very shallow, but at the same time able to adjust its height, and in turn change the level of oil to her legs, waist or neck. This brought down the amount of oil we needed a lot, but we still needed about 250 liters of this incredibly-hard-to-make oil. We used a mix of black finger paint, fibre sirup and water that we had to boil to make it as smooth as we needed it. This constrained us to make it all in cooking pots that only took 5 to 10 liters. Our kitchen was a mess afterwards!

The oil shots were the most complex and difficult by far. In addition to the oil being very cold, it was hard to handle and get smooth - it would quickly look terrible in camera. These shots also challenged our performer Ingrid who was a real fighter, doing take after take after take, while we worked with the oil.

The post-production was also real intense. Some of the things we tried to do practically didn't work out and needed to be improved, replaced or made entirely from scratch in post. In some of the shots we wanted specific oil patterns; for these we first had to camera track and match-move Ingrid’s body. We then built a custom tool that allowed us to draw lines on her and then generate liquid that followed these lines. We also made a last minute decision to shoot wider than the set we built, which meant we had to do set-extensions on every wide shot. In addition to this the craters on Ingrids body had visible borders so they all needed to be cleaned up.

Helmet is a small and multidisciplinary studio with a two-man VFX department that dynamically scales as needed - so on this job we called on our awesome VFX-friends at Paranode to pull it off. The amounts of hours and coffee consumed by Øystein in editing and Alex as VFX-supervisor, reached an all time high this time around.

A special thank you goes out to Ingrid for her breathtaking performance, hair and makeup artist Mari, SFX artist Elise, dancer Ida, lighting rigger Pekka, lighting operator Raymond, Second AD Eilif and the rest of the incredible team that contributed in various ways. This couldn't be done without you!

All in all, the process was a fun and rough ride through a super tight deadline and the three directors; Øystein Moe, Alexander Somma and Line Klungseth Johansen are excited to present a weird, dark and gritty video. 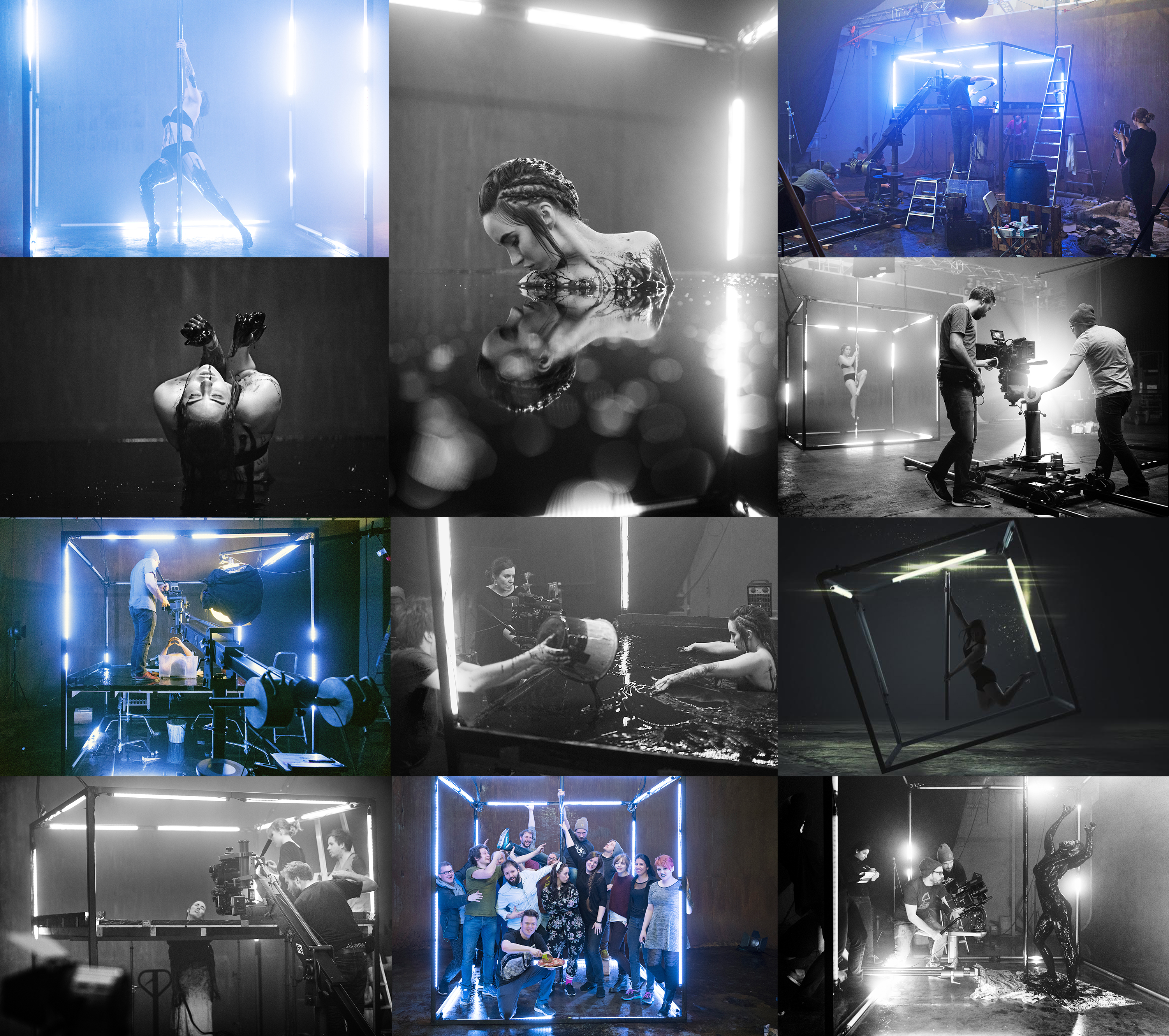